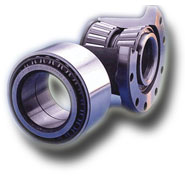 The word grease has been derived from old French word graisse, based on Latin word crassus meaning ‘thick, fat.’originally described the rendered fat of animals. The term is now applied more broadly to mean a lubricant of higher initial viscosity than oil. Grease can be defined as a fine dispersion of an oil-insoluble thickening agent - usually soap in a fluid lubricant which is basically a mineral lubricating oil. The soap is made up of fatty acid, saponified with alkali, which can be hydrated lime, caustic soda, lithium hydroxide or aluminum hydroxide. The type of soap depends on the conditions in which the grease is to be used. Different soaps provide differing levels of temperature resistance (relating to both viscosity and volatility), water resistance, and chemical reactivity. Grease LubricationGrease lubrication is generally used for bearings operating under normal conditions. Grease has certain advantages over oil because, it is easily retained in housing as well as, its sealing effects against the entry of moisture and outside impurities. In general, the bearing should only be 1/3 to 1/2 partly filled with grease because over filling will cause rapid temperature rise, particularly if speeds are high.

Grease must meet standards that are set by NLGI, and vehicle/bearing manufacturer’s recommendation.